I have prepared topo maps for each area, but the resolution ends up being a little low to make the file sizes manageable for emailing and downloading. If you would like to have your own, unedited map, you can download the 7.5-minute maps for free on the USGS website. They range in size from 4.7 mb to 7.4 mb.

1. Click on the Map Locator link (center right)
2. Type "atascosa peak, az" in the search field and click on Go
3. If you click on the red pushpin on the map, a window will pop up with a link to download the 7.5X7.5 map for the Ruby quadrangle.
4. If you click anywhere else on the map, a new red pushpin with appear, which you click on to again download that 7.5X7.5-minute map. It will be a different map only if you click in a different quad (outlined in black and names are highlighted in yellow) 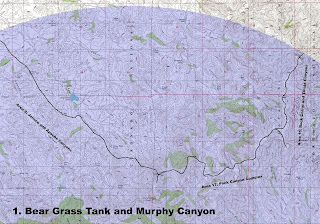 The AZAH Circle straddles eight different quads: Arivaca, Murphy Peak, Tubac, Bartlett Mountain, Ruby, Pena Blanca Lake, Alamo Spring, and Pajarito Peak. I created the maps by downloading all 8, making one giant map on Photoshop Elements, then drawing the circle using the drawing tools. I then cropped out each area and resized them.
Posted by Birdernaturalist at 8:32 PM No comments:

As in the previous two years we'll be having the countdown and no-host dinner at the Longhorn Grill in Amado. We'll start the species countdown around 6:30, so try your hardest to be there by then. You can also show up anytime before that to have your dinner or just drop off your list.

This is the restaurant with the façade shaped like a giant cow skull. The entrance to the restaurant is around to the left, on the north side of the building. Please let me know if you are having dinner here so I can warn them how many people to expect.

Please keep in mind that it takes a while to get out of the circle. Google Maps says that from the Sycamore Canyon trailhead to Amado is 1 hour 11 minutes.
Posted by Birdernaturalist at 3:36 PM No comments: 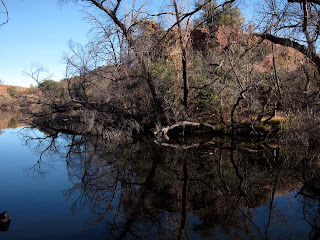 I know most people have this issue already figured out, but I also know that some find it confusing. In addition to what I wrote in a previous post, I thought I would give a simpler example.

So let's say there's a party of two birders covering an area. They bird for one hour and walk one mile together. Easy: That's one party-mile by foot, and one party-hour. Then they split up (out of earshot at least) for one hour. They each walk one mile during that hour and meet up again back at the car. Since they are separate, each birder is a "party." So during this time, for their CBC area, they racked up two party-miles by foot and two party-hours. Adding that to the previous total comes to 3 party-miles and 3 party-hours. Then they get in their car and drive to the compilation dinner. For 1/2 hour and 3 miles of driving they are still in their area of the circle and spot one bird flying over. Their total for the day is:

This being a simple example, these birders vastly uncovered their area. The area that Art Schaub and I covered last year, Pine Canyon, has no roads, and we didn't split up. So it was merely a matter of zeroing the trip odometer on my GPS receiver when we started hiking. By the end of the day we logged 9.65 party-miles and 8.2 party-hours, all by foot. But since we had camped there and got up at 4:30 to some owling, I also kept track of the 2.25 miles and 2.5 hours of owling. 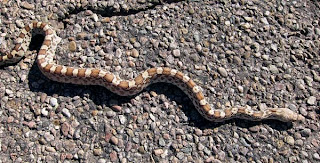 Photo at top: Habitat at Peña Blanca Lake, which has hosted several rarities in the past, including the state's first record of Sedge Wren this winter.

Photo at bottom: Gopher Snake crossing the road at Peña Blanca lake on December 11. If it's warm enough, this species can be found even in mid-winter.
Posted by Birdernaturalist at 9:56 AM No comments:

Safety in the Atascosa Highlands

There has been a lot of publicity surrounding safety in the border region. Most of it is hype, in my opinion. There are certain neighborhoods in Tucson that are more dangerous. Here are some of my recommendations for saftey:

1. Act like you're birding. That shouldn't be too hard.

2. Don't chase anyone with a backpack or a gun.

4. Don't act like a vigilante and go after any groups or try to make a cell phone call just because you see something suspicious.

5. Stay within voice contact of another teammate or at least make for a rendezvous point within a reasonable amount of time. A twisted ankle or an unfortunate encounter with an agave is enough reason to not be all alone out there, though I have hiked alone there several times and not had any trouble.

Here's snippet from a recent article in the Tucson Weekly, quoting a birder, CBC participant, and former district ranger for the USFS:


But Keith Graves says he's worked the area, often alone, for 12 years with no problem, and that the Coronado has had no complaints from people who've been accosted. "As long as you're not stupid, it's safe to go in there," says Graves. "But take precautions. It's like camping out in Montana without managing for grizzly bears."

He says if you see backpacks or packages wrapped in burlap, leave them alone. If you see a group that doesn't fit the surroundings and doesn't look like a hiking club, go the other way.

Graves' biggest fear is vigilantes announcing they're going into an area to stop drug-smugglers, putting hunters in danger. "A bandit won't know if I'm a deer hunter or if I'm out to find him," says Graves.

Otherwise the article glossed over his testimony and opinion, being rather sensationalistic and sounding more like a propaganda tool of the current state governor's office. It did list nine recent reports of violence from the region and all have involved border patrol agents, undocumented immigrants, and drug smugglers. There don't seem to be any reports involving hunters, hikers, and birders, despite their being all over this area year-round.

Don't forget to read through the old archives of this blog, using the links on the right. All the info is still current and useful.
Posted by Birdernaturalist at 8:10 PM 1 comment:

You can now register online for Christmas Bird Counts at http://www.christmasbirdcount.org/. Once there, click on the link "Get Involved" on the right. If you sign up for 4 CBC's this way and pay online, each additional CBC is free. The catch is that the compiler has to have registered his or her CBC for online sign-ups, and not all of them know how to do this. Let your compiler know that you want to register online if that count isn't available.
Posted by Birdernaturalist at 2:55 PM No comments:

Links for Other CBCs

Thanks to the volunteer time of several people who compile CBC schedules (such as Walter Thurber for Arizona and the amazing map created by Kurt Radamaker), we now have no reason for not planning our time carefully from Dec 14 to January 5 to do at least 8 counts each. Of course AZAH should be your priority.


Unfortunately, it doesn't look like Nevada has anyone compiling such information.
Posted by Birdernaturalist at 10:44 AM No comments:

Where is the Atascosa Highlands CBC Circle?

This is a very common question. I'll post a map of the circle below to make it easy.

Bill Harrison created this circle with apparent much thought and planning in 1960 – a circle in this region could not have been placed in a better position. And unlike almost all nearby circles it hasn't been moved by any of the subsequent compilers.

It's best features are:
• maximum coverage of public lands, minimal private lands
• nearly bisected by a single good road with access roads off of it
• minimal overlap into Mexico
• just barely including three important bodies of water – Arivaca Lake in the NW, Bear Grass Tank in the N, and Peña Blanca Lake in the SE.
• completely encompassing all of the Sycamore Canyon-California Gulch southward-flowing drainages
• and, completely unbeknownst to Bill, incorporating the entire US range of Five-striped Sparrow (the species wasn't discovered here until a few years later)

And Bill did this all without Google Earth. (He may have even used a slide rule...) 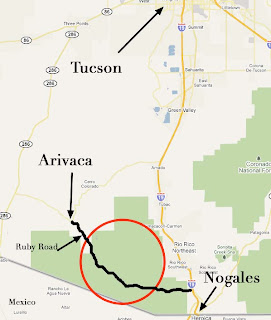 Posted by Birdernaturalist at 2:55 PM No comments:

I've already started recruiting for AZAH, the Atasoscosa Highlands Christmas Bird Count, set for Friday, December 31, 2010. I assign area leaders and their teams well in advance, so please contact me as soon as you know you can commit.

Here's a view from near the unassuming center of the circle – with almost countless canyons and rocky ridges for 7 1/2 miles in all directions. Click on the image to open a window with a larger size.

Posted by Birdernaturalist at 4:34 PM No comments:

Leading the Nation in National Highs for 110th CBC! 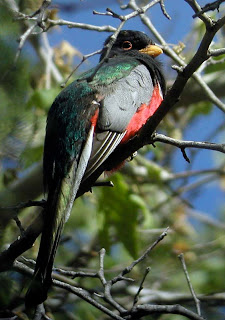 I just received my issue of American Birds summarizing the 110th Christmas Bird Count and was surprised to find that Atascosa Highlands led the nation with highest tallies for 17 species on our January 3, 2010 count. In my last blog post I listed the 15 that I found, but Brent Ortego in his article found a couple more – Elegant Trogon (we had one, tying with three other AZ counts) and Rufous-crowned Sparrow, a silly oversight on my part – AZAH always has the high count for that one. The next closest count was Weslaco, TX, which had 15 highs.

Brent also compiled the all-time highs for all 110 years of the BC, and AZAH ranks 13th nationally with 10. Our neighbor, the Nogales CBC (which actually illegally overlaps the older AZAH circle, something that should be addressed at some point) ranks 9th, and AZAH stands a good chance of eventually topping most of those, with the exception of the exotic Elegant Quail and the 1997 Nutting's Flycatcher counted in their total.

At top: The Atascosa Highlands CBC tallied 4 Elegant Trogons in 2008, setting a new all-time high for this species. A 5th was found a few weeks late in remote Ramanote Canyon, which hadn't been covered on the CBC.
Posted by Birdernaturalist at 4:31 PM No comments:

One of the things that makes the Atascosa Highlands CBC special is the number of species for which it gets the national high each year. This year we had fifteen national highs. Last year we had 14, and only three CBCs (out of 1673 counts) had 15 or more. So we'll probably be in the top 5 again this year.
Even though three Arizona CBCs still haven't entered their data yet (Sedona, Sierra Pinta-Cabeza Prieta NWR, and Timber Mesa), I went ahead and compared our totals across the state. We had an additional highs for 11 species and one form. Great job, everyone!

Mark your calendars for Friday, December 31, 2010 for the next event.