Preparing for the CBC

As we continue to field some very welcome last-minute sign-ups for this Sunday's CBC, a serious compiler prepares for the assault on Arivaca Lake two days in advance by learning how to mount the Sheppards' canoe to the top of his truck. 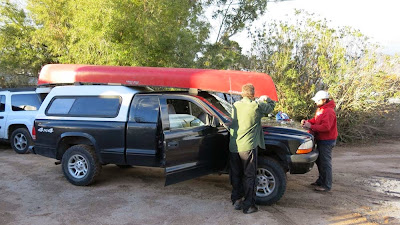 Paul isn't able to take part on the CBC this year but is contributing in a big way by lending his canoe. And Jake is lending his truck to the team covering the lake. It remains to be seen if this year's team will do as well in covering that crucial reservoir with its many arms and branches. I don't think we have anything to worry about.

Posted by Birdernaturalist at 6:32 PM No comments:


The Atascosa Highlands Christmas Bird Count (AHCBC) will be held on December 22, 2013.  This date was chosen so it will not compete for participants with other Arizona CBCs.  The other 2 counts being held in Arizona on December 22nd are Hassayampa and Camp Verde, both of which are several hours away from southeast Arizona minimizing overlap.

Last year was a banner year for this count.  A record number of participants (74) established a record number of species (142)!  It's no coincidence that the more people that participate, the more birds that are found.  If you know anyone to recruit to help out this year please let me know.

Arizona held the high count record last year for 74 species (and 5 forms)!  The Matagorda County Mad Island Marsh Texas
--> CBC lead the nation for 'high-counts' with 17 species.  The Atascosa Highlands CBC came in close second place with 16 national high counts.  This CBC also was tied for a few of the high counts with other Arizona CBCs.
They are as follows:

You can see there's quite a number of exciting species to be seen in this circle.  If you would like to join us this year on December 22nd please email Jake Mohlmann (mohlmann2 AT yahoo.com) to sign up.

Posted by Adventure Birding Company at 8:45 AM No comments: