Mark your calendars for January 2, and contact the compiler to sign up for the Most Awesome CBC in Arizona! 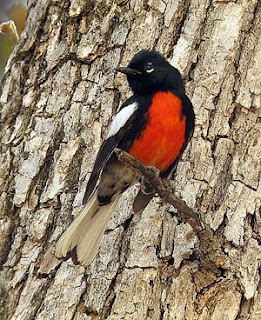 John Yerger has agreed to step in and organize the count this year since Jake Mohlmann and I (Rich Hoyer) won't be in the country during the entire CBC season.

Why is this the Most Awesome CBC in the state? The circle was brilliantly designed in 1960 by Bill Harrison and has the following fabulous features:

• It encompasses the maximum amount of public property possible in this region, being sandwiched between areas of private property.

• The five largest landowners within the circle boundaries (not counting tiny mining claims scattered here and there) give us permission to count on their land, including the town of Ruby, Bear Valley Ranch, and three ranches on the western edge.

• It excludes as much of Mexico as possible while still hugging the border.

• In includes – just barely – both Arivaca and Peña Blanca Lakes.

• The entire U.S. breeding range of Five-striped Sparrow is in the circle (not including occasional outliers in some years). What is more amazing is that in 1960 the species had not been discovered yet in this country.

• It has the highest concentrations of Montezuma Quail, Rock Wren, Canyon Wren, Rufous-crowned Sparrow, Canyon Towhee, and wintering Elegant Trogon of any CBC circle in the country.

• It usually places in the top 5 US circles in the number of species with the annual high count (snagging first place in 2009-2010).

• It has a stunningly gorgeous landscape, with rolling hills, canyons, cliffs and endless opportunities for cross-country hiking.

• It's such a wild a remote region that at one point there were two wild Jaguars roaming this back country.

• There are no Starlings, Rock Pigeons, House Sparrows or Great-tailed Grackles.

I recommend reading all the archives of this blog (links on the right), as most are still quite pertinent. Two of the most useful show maps of the circle, so here are links directly to those posts:

General location of the circle

More detailed map of the circle


Photo at top: Painted Redstart. Scattered individuals and pairs winter in the more wooded canyons in the circle. Last year, with 9, Atascosa Highlands CBC had the highest number in the U.S.
Posted by Birdernaturalist at 9:10 AM No comments:

Nearly all CBC's have finally posted their results to the National Audubon website, so I have been able to determine that our sixty-six hardy souls, birding all day in rugged lands on December 31, 2010, recorded the highest number of individuals for twelve species among all US Christmas Bird Counts this year.

Some are shoo-ins, such as Canyon and Rock Wrens, Rufous-crowned Sparrow; there is simply no other circle that has the quantity and quality of habitat as AZAH (as long as we have enough observers). But we almost missed a couple. Montezuma Quail is perhaps the most noteworthy, as the Davis Mountains CBC recorded 19 this year. And one surprise was Red-naped Sapsucker, usually seen in greatest numbers on the Mogollon Rim, with Prescott being number one – this year they had only 26.

The data has been entered and finalized. Go to "Results: Current Year" at http://christmasbirdcount.org.

Posted by Birdernaturalist at 12:08 PM No comments: 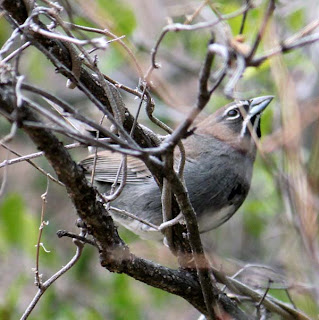 I'm still crunching numbers from the Dec 31, 2010 CBC, but I'll have a summary soon. In the meantime, here's a great account from Philip Kline from his area.


"I spent a chilly day in stunning scenery yesterday with three intrepid birders and one game non-birder covering lower California Gulch and Sycamore Canyon down to the Mexican border for the Atascosa Mountains CBC.  The day vacillated between cold, colder, and freezing, with occasional snow and sleet showers and a windy afternoon, but we persevered and ended up with 48 species, although numbers were quite low.  Lower Sycamore Canyon usually has roving bands of Bridled Titmice, Ruby-crowned Kinglets, with the odd Hutton's Vireo, Bewick's Wren, and occasionally something else mixed in, but the afternoon produced mostly isolated individuals of these species.

"We started the day at Border Tank, which can be accessed by a decent (thanks to the Border Patrol) 4WD road continuing south from the lower end of California Gulch.  Border Tank and Hidden Tank in this area can be dry, but often have waterfowl when full.  Today we were lucky and Hidden Tank had good numbers of American Wigeon and Green-winged Teal, with a few Mallard, Gadwall, and a Pintail mixed in.  From Border Tank it is possible to find decent trails that head generally southeast and over a saddle and into Sycamore Canyon.  We only encountered a couple of flocks, one containing an Ash-throated Flycatcher.  A couple of Rufous-winged Sparrows were down by Hidden Tank.

"Crossing over into Sycamore Canyon amid snow flurries, we decided to hop over another low saddle and check out lower Tonto Canyon.  This Canyon runs along the Mexican border on the Arizona side then runs into Sycamore Canyon on the Mexican side.  We didn't have long to spend in there, but it's a picturesque little canyon that I might have to go back and explore some more.  Five-striped Sparrows also breed in this Canyon, as well as in lower Sycamore Canyon.  We didn't see anything special, but it was quite birdy and we found another Ash-throated Flycatcher calling over on the Mexican side of the border.

"By the time we started to head up Sycamore Canyon proper, the wind really started to pick up and birds were few and far between.  But what we lacked in quantity, we made up for in quality.  After three years of trying, I finally managed to call in a Five-striped Sparrow about 3/4 mile upstream from the border.  [See photo at top.] They're pretty tough to track down in winter.  As we continued up Canyon, we had brief encounters with two different Elegant Trogons.  Farther up still, there were two
very vocal Painted Redstarts.  Empid challenges were plentiful in the Canyon too.  Fortunately, all but one bird called and we ended up with one Gray, one Dusky, and two Hammond's.  The usual winter denizens were also present in the Canyon in low numbers.  We bushwhacked through dense thornscrub up and over another saddle to get back over into California Gulch, but were rewarded for our scratches with fabulous views of the Canyon as the evening sun finally peeped out from under the cloud deck lighting up the clifftops and a belated Golden Eagle soaring over the opposite ridgeline.

"If anyone is interested in covering this area with me next year, let me know.  Tonto Canyon could certainly use further exploration.  The area is rugged and remote, but well worth the time and effort."
Posted by Birdernaturalist at 7:50 AM No comments: