Any Water in Bear Grass Tank?

If anyone has the gumption to check out a seldom birded sector of the AZAH circle in advance of the Dec 22 CBC, please consider scouting Area 1 – Bear Grass Tank. It's a huge area, but birders have only covered the western half, where there is better access and more habitat diversity. It wasn't covered at all last year, due to shortage of participants, so it's possible not a single birder has been there since the Dec 31, 2010 CBC.

This is one of the few areas that has a chance for Abert's Towhee, Chihuahuan Raven, Scaled Quail, and – if there's water – a good selection of ducks and maybe a rare water bird. On our first scouting trip here in 2008 we found an Eastern Phoebe in the good riparian vegetation below the dam. The northern, lower elevation parts of the area should help boost our Rufous-winged Sparrow numbers, and in the southern parts of the area are the right kind of juniper woodlands that could host Western Scrub-Jay, Townsend's Solitaire, and Western or Mountain Bluebirds.

As compilers, Jake Mohlmann and I have the luxury of deciding where WE want to bird most on the count day. And every time we start talking about the virtues of any individual area of the circle, we start yearning to cover that area ourselves. It turns out there is no bum area here. All have little pockets of habitat, endless off-trail hiking possibilities, side canyons that have never been birded.

How many people we send into this area really does depend on the water situation, so if you do go birding here in the next 4 weeks or so, let us know what you find. A high clearance vehicle is recommended, and directions are on the map below.

Two miles north of Arivaca, turn east onto Universal Ranch Road (right at mile marker 2). From here the road jogs south, then east, then makes a few dog legs to go around the north then east side of Twin Peaks. Note: this road is not on the 1981 7.5-minute topo map. 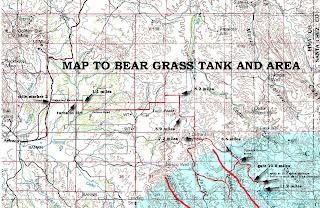 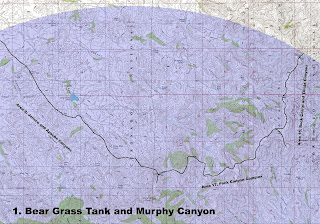 Posted by Birdernaturalist at 11:44 AM No comments:

Atascosa Lookout: Burned to a Crisp

Jake and I did some scouting in the circle today. Neither of us had been to the lookout since the Murphy Complex burn in June 2011, so that was our main target.

But first we had to check out the White Rock Campground area just upstream from Peña Blanca Lake and whip out one of our secret weapons: bird seed. I searched for a good spot to spread a few pounds of mixed grass, red millet, and canola seed where birds would be visible from a short distance, yet close enough to cover that they would come down to the ground with a sense of safety. The location I chose was below the left side of the road (as you're headed west), under a thicket of hackberries, just as you reach the first pipe fence that extends east from the corral at the turnoff into the campground. We birded around here for a bit and discovered two of Atascosa Highland's winter specialties: Hepatic Tanager and Elegant Trogon. There were also lots of Chipping Sparrows, with a few other species, including Dark-eyed Juncos mixed in.

Then we did the hike up to the peak, stopping where there were still some trees. Much of the brush was gone, and most of the juniper-pinyon near the peak completely wiped out. Gone are the Crissal Thrashers and Western Scrub-Jays. Here's a view looking west towards Baboquivari Peak, with the nice woodland at the Sycamore Canyon trailhead just barely visible as a dark area at the far left-center part of the photo. This particular patch of burnt forest was good for wintering Townsend's Warbler and Scott's Oriole, but no longer. 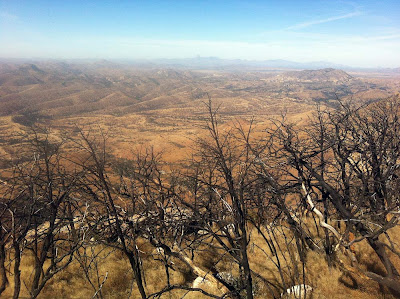 This is up at the very peak looking northeast, with the Santa Rita Mountains in the distance at the far right. The biggest peak on the left is Atascosa Peak, and the sharp one just right of center is Ramanote Peak, both of which are in the circle. Before the fire, the close ridge low center was a dense, impenetrable thicket of manzanita, silktassle, mimosa, oak, pinyon, and juniper. Now it is mostly grassland. 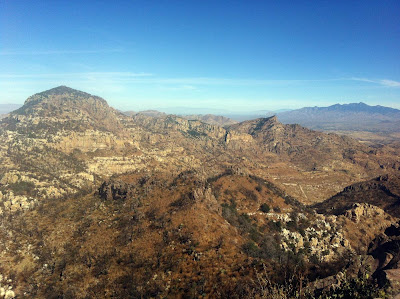 The main advantage of the trail is no longer the forest at the top, but it still offers the best access to the upper reaches of Ramanote and Bellota Canyons. I'm hoping this year someone will want to cover these, getting dropped off here and hiking down the canyons to meet up with the crews driving up from below who are covering the lower stretches at the eastern perimeter of the circle. Let me know if you're into such a hike, and I can give some GPS coordinates or even a route.
Posted by Birdernaturalist at 6:48 PM No comments:

Viewing The CBC Circle On Your Smart Phone! 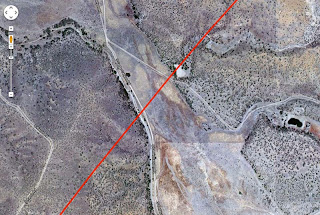 This is really cool, but it only works if:

2. You have a smart phone, like an iPhone (easy, but no so free)

3. You have a cell phone signal. (Good luck in most of the Atascosa Highlands...)

But if you meet these conditions, you can go online and see the edge of this CBC circle in maps.google.com. You need the following link to navigate to the public map with the circle that I created in my own Google "My places" account, but you need to click on it from within your smart phone. So if you're at your laptop or desktop, copy this link and paste it in an email to yourself. Open that email on your phone and click on the link.

Add this to your maps by saving to "My places."

Let me know how this works and if I need to add any information.
Posted by Birdernaturalist at 6:50 PM No comments:

Alas, Chris McCreedy won't be here to do his magic on Rock Corral this year. Looking for a rugged  hiker with 4X4, willingness to scramble up slopes, pish his or her brain out, and scour this subtropical paradise.

I was also told that if you google "rock corral canyon," my initial blog about this amazing canyon is one of the top hits.
Posted by Birdernaturalist at 5:43 PM No comments: